Snow in the South – Yet Again

There was a winter weather warning advised for today but we were all hoping that the weather people were wrong.  Unfortunately, they were wrong but the wrong direction.  The Allatoona General Meeting was scheduled for today and we have decided that we will cancel our meetings if Cobb County Schools are cancelled.  Last night no schools were cancelled but I got up early this morning to see what was going to happen.  Since this is a potluck meeting, I didn’t want to make my dish last night in case it wouldn’t be needed.

When I got up, they had cancelled some schools north of us but not Cobb County.  It was just lightly snowing but nothing was sticking to the ground.  I got up, made my agenda copies and a big pot of Mac and Cheese.  I got everything in the car and it was snowing a little more but nothing heavy.  Here is what it looked like when I pulled out of the driveway on my way to the meeting. 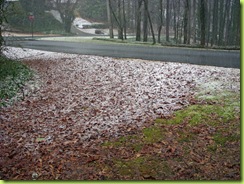 I wasn’t sure how many people would venture out for guild.  We had a lot less than usual but still a good crowd.  Lots of people were thinking like me and we had several nice warm dishes to share.  Of course there was still plenty of desserts also.

As the meeting went on, the snow got heavier and heavier.  We had a very short meeting and ate our lunch early.  We were all on our way home soon after noon.

Here are the photos I took right after arriving home. 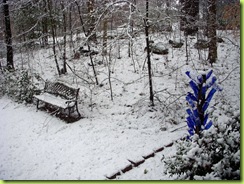 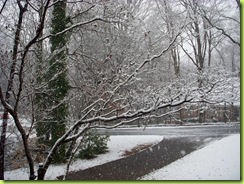 You can see that while we had a lot of snow on the ground but the driveway and street were clear.  Here is a photo out of the kitchen window. 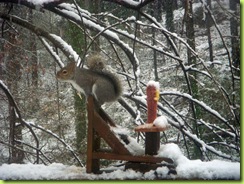 My little squirrel friend appreciated the corn that we put out for him.  It kept snowing for another hour or two but has stopped now and it is starting to melt.  It has stayed right above freezing all day but is expected to get cold tonight.  We are due to start our retreat tomorrow morning so hopefully we won’t have ice to deal with.

I have photos of show and tell but will do that in another post.

Is winter ever going to end???? By the way, they let school out early today because of the snow.