I got the binding sewn on the Dazzling Dogs quilt during the Sewing Expo today and displayed it – not very well but it drew a lot of attention. 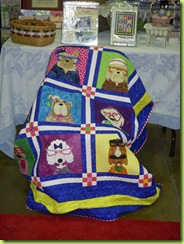 I saw someone at the Expo who had a Letty’s Bag.  Since I didn’t recognize her as a Tiny Stitches customer, I asked her where she got the pattern.  She told me she bought it there and it was designed by Two Wacky Sisters.  I introduced myself and explained that it is Two Wacky Women and that one of the Wacky Women is my sister Robin.  It turns out that she was from Oregon and had not only made her bag but made two more for her sisters who were there at the Expo with her.  She brought them by the booth for a photo op.

Here are all three of them together.  The one on the left is the one I spotted.  The middle one is made of velvet or velveteen and doesn’t have it’s button yet.  The last one also has a cat appliquéd on the back of the bag.

We had sold out of all the patterns but expect more early in the week and will have them for Shop Hop!