I have decided to join Judy’s UFO Challenge for 2011.  I have lots and lots of UFO’s but finally decided on 12 to list for the challenge.  I tried to do a UFO a month during 2010 but only managed to finish three of the ten I listed.

I have repeated some of them for 2011 but others I decided to pass on.  I still want to get them finished someday but have decided that if I didn’t work on them in 2010, I apparently didn’t really want to finish them badly enough.

Here are the projects I want to finish this next year. 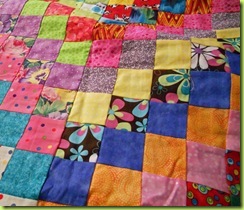 This one is a scrappy bargello that I made in a class with Bonnie Hunter a couple of years ago.  The top is finished but needs borders before it can be quilted. 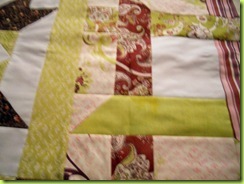 I completed all the blocks, got them sewn together but still need the borders and quilting.  Can you start seeing a theme here? 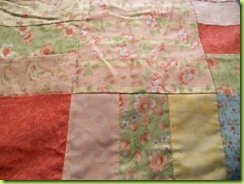 This is a quilt I started many years ago and although all the blocks are made, they are not completely put together.  More than half is done and it would take very little time to finish this one.  Of course, that means borders and quilting.

4 – How Does My Garden Grow 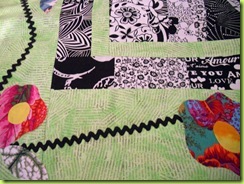 I made this quilt during the Allatoona Retreat earlier this year.  It actually has the borders on it but needs more flowers cut and fused, then stitched down before it can be quilted. 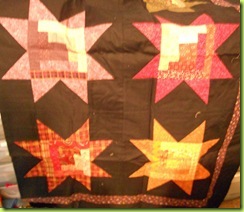 This one is actually finished – at least the top is.  I need to find a backing for it and get it quilted. 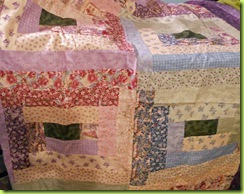 This one has all the blocks made and put together.  I need to decide if it needs a border, find a backing and quilt it. 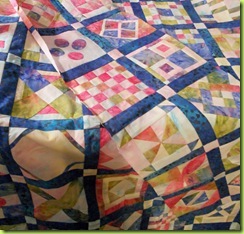 This was a round robin from several years ago.  It has a slight problem since the bottom two rows were about 2 inches longer than the previous rows.  I took them off but I need to figure out how to fix it so it lays relativity flat.  Of course, it then needs border and quilting. 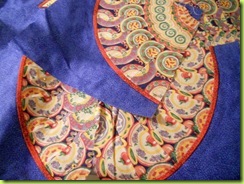 I took a class from Bethany Reynolds and made these fans.  The fabric is not great since I purchased it at Joann’s.  I was unemployed at the time and money was tight.  Only about 1/2 the blocks have the fan appliqued on the background but it looks like everything is there. 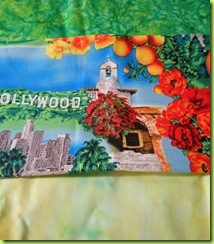 This is probably not technically an UFO since it isn’t started but I want to get it made.  I love this fabric that was unique to the Southern California Shop Hop two years ago.  The pattern is BQ2. 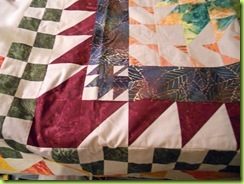 I found this quilt top earlier this year and could hardly remember it.  It is a fall quilt, with leaves and fall colors – not really my type of quilt but the top is done so I should get it finished.  I did buy fabric for the backing earlier this year.  After I purchased it, we decided to make kits for another quilt and needed the fabric I purchased.  I returned it and bought another leaf print which I then put somewhere safe – hopefully I can figure out where that is when it’s number comes up. 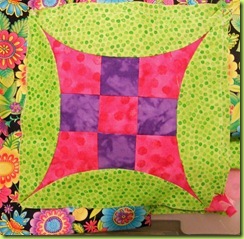 This is another class project from a class with Sharyn Craig several years ago.  I have several blocks completed, many other nine patches made and a hand drawn layout along with the bright print for the borders. 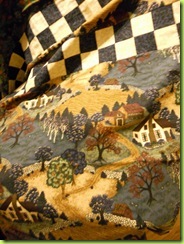 This one needs a couple of borders added to it before it can be quilted.  I really don’t like it but it will be good for a charity quilt so I would like to finish it so I can donate it.

I really hope I can keep up with the UFO Challenge – I would love to have all these done by the end of 2011.