It is still cold here and some of the snow is still on the ground. That is very unusual for Georgia. I thought I would post a photo of the quilt on my front door. I had it up for Christmas and decided that since it was a snowman instead of Santa that I could leave it up for the month of January. Of course, at that time I had no idea we would get snow once, and never even thought it would snow twice. 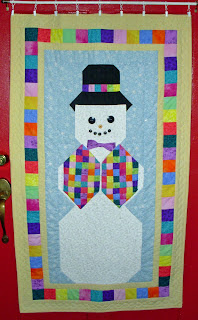 I spent the day working on customer quilts. One was a sailboat quilt that needed custom quilting and the second one was just a meander on a Thimbleberries quilt for the quilt shop.

Bill's best friend had minor surgery today so he was at the hospital with the wife until Mike was able to go home. I decided to make dinner for them so made a chicken/spinach/noodle casserole, salad and buttered rolls. Michael said it was one of the best meals he had ever eaten and asked for the recipe. Of course, I had just thrown a bunch of stuff together and don't think I could make it the same way again. I did save a small amount for me and it really was good. I kind of adapted a recipe I saw Paula Deen make a few days ago.

Then I made a pineapple upside down cake - one of Bill's favorites. It really turned out great.

I just spent an hour or so cutting pet screen into 12 x 18 pieces. I am teaching mesh bags at guild in the morning and the guild is supplying the mesh. I cut up two rolls and think I will stop by Home Depot in the morning to get another roll or two, just in case. It is hard to figure out how many people will show up. I will take some pictures tomorrow of the bats that are made.
Posted by Melinda at 10:43 PM