Today was an exciting day at the quilt shop. We were used as a location for filming a TV commercial. The commercial wasn't for the quilt shop or anything related to quilting or fabric, but for an allergy product. Apparently, the premise was that if you take this product, you will feel well enough to do all your favorite things like going to the quilt shop and picking out fabric for a new quilt. They also filmed at the bowling alley that is just behind us. Apparently this wonder drug allows you to bowl and shop on the same day. 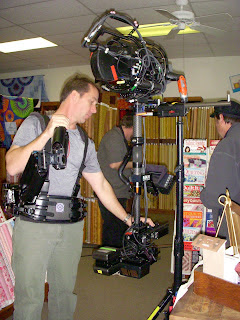 Here is a photo of one of the cameramen. There were about 25 people in the crew, along with 2 women that were the subjects of the commercial. They also hired two of the quilt shop staff to be background for the filming. My only responsibility was opening up the shop for them before we actually were open for business. They were supposed to show up at 9:30 and I was there but they were still over at the bowling alley until almost 11:30. They were in the shop for about 1 1/2 hours and managed to clean up and be out of there before we opened up at 1:00.

It was interesting to see how many people and how much equipment they had with them. One of the women (actress?) shops at the quilt shop and belongs to one of my guilds so I guess she is the one that suggested using us as a location.

After all that, the rest of the day was ho-hum. Just another fun day helping quilters pick out projects and selling them fabric. After coming home and having dinner, I went down and quilted for a while on a customer quilt while Bill watched the football games.
Posted by Melinda at 10:25 PM