Tonight was the magical slice and dice class.  Cindy is making a Christmas quilt and she is planning on keeping it for herself.  Like most quilters, she gives most of her quilts away but has fallen for this one and wants to keep it. 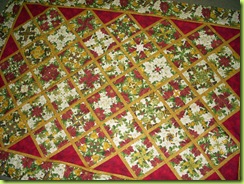 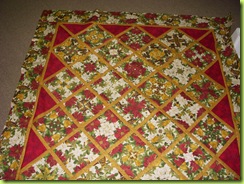 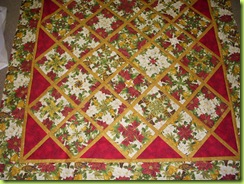 The fabric has birds in a pear tree, along with Christmas flowers.  The blocks are beautiful and her choice of the gold for sashing and red for the setting triangles really sets off the blocks.  We had a little cutting mishap the first class so her blocks are slightly smaller than the pattern calls for but it is still a nice sized lap quilt.

Since there was only one person in the class, I made a quilt along with her.  I was able to show her each step on my quilt before she actually did hers.  Here is mine. 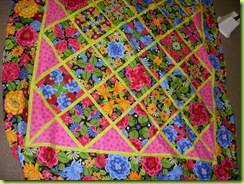 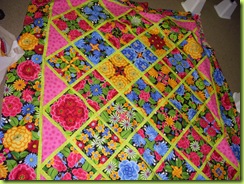 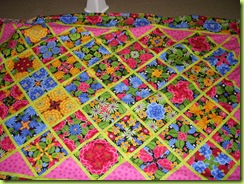 I ended up putting a larger border on mine so it is quite large.  The flowers are so large that I thought it needed a larger border.  I think I cut the borders 7 inches, instead of 5 1/2 as called for in the pattern.  I am going to bind it was the same lime green as the sashing.