The second day of the retreat didn't have the beautiful weather of the first but since there was no reason to go out of the sewing room, it really didn't matter that it was cloudy and raining. This is out the same window as the sunset photo from yesterday but earlier in the day. 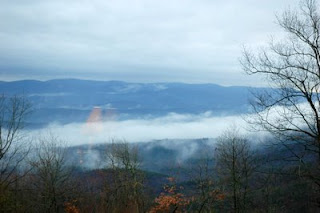 One of the things that were in the goodie bags was a plastic cup/glass that I bought at Hobby Lobby. There is a removable outside clear plastic cover to the inside as the glass. It is designed for children to color a design and then put it into the cover. We challenged the group to put something in the cup out of fabric. 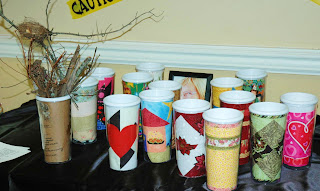 Here are some of the cups that were turned in. We voted for the best ones and gave out prizes to the two that tied for first place and the runner-up. They were really creative but I can't locate the photo I took of the winners - maybe later. I was surprised at the creativity and enthusiasm that this challenge awakened. 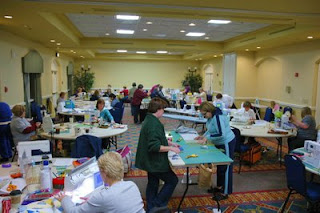 The meeting room was quite large and we had plenty of room. The round tables usually seat 10 people for banquets but we had 3 quilters at each table. We also had several ironing boards, and cutting stations. I got bed risers at Walmart so the cutting stations were the correct height. 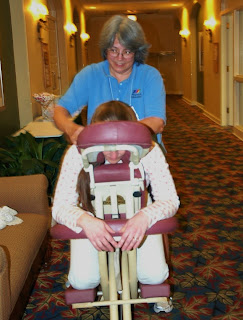 One of the best things was that we had someone who gave massages. She brought her chair with her and offered 10 minute massages to everyone who was interested, which was most of the group. I did manage to sneak in a get a brief massage - it was wonderful!

Next post will have some photos of the mystery quilts. I am so glad I resisted the request to make kits. Each quilt was so different and wonderful. Not everyone made the mystery quilt but my guess is that there were about 30 of them. Most people were able to finish the quilt center and some even got the borders on.

I didn't have much time to sew but I was able to finish all the blocks. The Kaffe fabric turned out good.