I have belonged to the Quiltbuddies Yahoo group for many years now. Each year we do an anniversary swap and this year it was 9 inch nine-patch blocks. The only rules were that they were to be scrappy and the dark goes in the corners and middle, with light in the other areas.

It is hard to believe that this group started 10 years ago and that this is the 10th anniversary swap. I have not participated in all of the swaps but do have blocks stuck away from a couple of them. Any way, I decided to join this year. We each made 2 blocks for each person and we ended up with 30 people sending in blocks, so I have 60 of these blocks to work with. 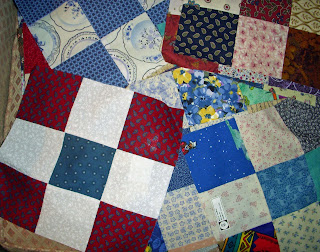 I am thinking of cutting the blocks in quarters and putting them back together for a charity quilt. I think it will be a lot more interesting quilt than I was afraid of when I thought about large nine patches. I will play with some of the blocks tomorrow to see how it looks.