Beginners are not beginners anymore

We had the last class of the Beginning Machine Piecing Class today.  Although three people signed up for the class and attended the first couple of sessions, one dropped out and hasn’t finished the class or project.

The two that finished the class did a great job on their first quilt top.  Today we worked on putting the blocks together and both of them got the first borders on.  They still have one more border to add but I am confident that they can do that on their own. 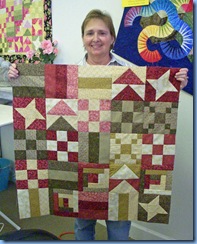 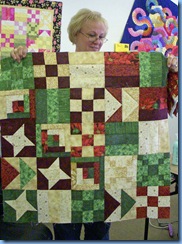 Don’t they both look proud?  In these photos the first borders had not been sewn on but they were so excited to have the blocks sewn together that I just had to get a picture of them at that time.

By the way, the sample quilt that I made for the class is in the background on the left of each piece and the one on the right is a masterpiece by Barb.  It is really wonderful.