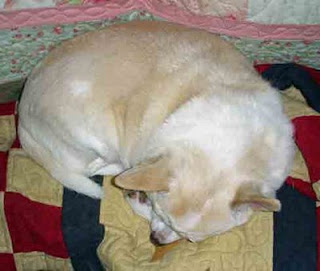 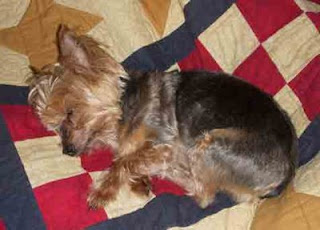 I can never get good photos of my dogs. Chula hates the camera and runs from it and Max usually looks like a devil dog with red eyes. I took these photos yesterday while they were napping on Bill's quilt on the couch.

Chula (the Chihuahua) weighs 8-9 pounds and sheds like you can't believe. I think I could knit a new dog from the hair I pick up. I can't imagine how she can have so much hair and still lose so much.

Max (the Yorkie) is our baby. He is 14 years old and weighs about 6 pounds. He weighed less than 1 pound when we got him. He might be little but he has a very big personality. He is asleep right now on my footstool with his head on my foot like it was a pillow.

Sometimes I wonder what Bill and I talked about before we had the dogs - they are such a major part of our lives.