I am finally getting back to normal after the Georgia Quilt Show. We set up on Wednesday and then worked the booth for three days on Thursday, Friday and Saturday. We took down the booth on Saturday night - it comes down much quicker than it went up. It took about 6 1/2 hours to get set up and we took it all down in just about an hour. 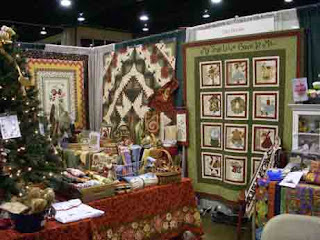 This was the first time that the Georgia Quilt Show was put on and so of course the first time we vended at this show. It was a good show and the next one will be held in 2010, which is good because the ECQG show is next September in 2009. Having two shows so close together may not be worthwhile.

The photo above is the center of the booth. I couldn't take a photo directly in front because all you could see was the Christmas tree. What a great idea it was to take the tree. We filled it with gift items and Jim Shore ornaments. It looked great! 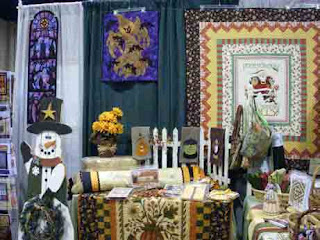 While most of the booth was Christmas focused, this table held Halloween fabrics and projects. 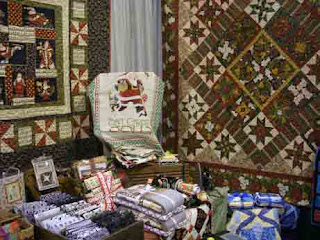 Here is the right corner of the booth, with Christmas kits and miscellaneous fat quarters and other items. 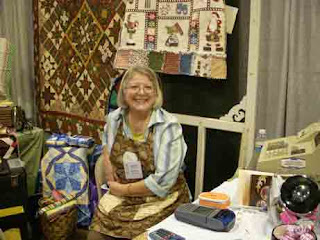 Here is Mary waiting for customers before the show opened one day. She made the cute aprons that we wore. It was a great idea having the aprons to identify ourselves.

They had a demo stage at the show and I did a demo of the folding tote bag each day. It truly takes only 1/2 hour to make out of 1/2 yard of fabric, even on stage. It was a very popular pattern and we did well with it. The name of the pattern is "The Tote Along" and can be purchased at Tiny Stitches. The pattern was developed by my sister.

I also did a demo of the new Clover Pom-Pom maker. We made Hydrangea flowers out of batik and they turned out great!