I can't believe it has been so long since I posted. I don't really have an excuse but have been very busy. Since I have been absent so long I think I will start with a guild work day we had late in April. Once more we made cool ties to send to Iraq. In just a couple of hours, we made 143 cool ties that are on the way to the son of a friend. He is a chaplain's assistant and will pass out the ties to some of the men/women he sees. 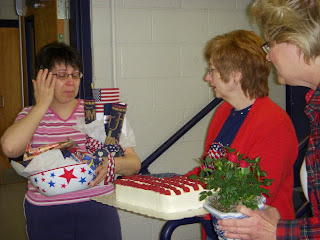 Another exciting thing that we celebrated was Hugette becoming an American Citizen. We surprised her was a red, white and blue FQ shower. We also had a wonderful cake decorated by Angela. 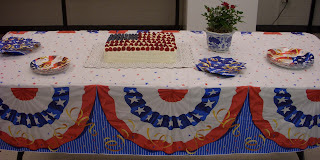 Here is the table with the cake on it. 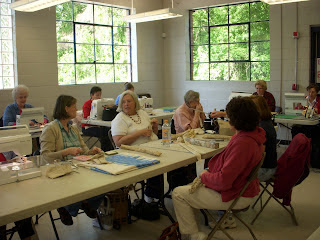 Here is some of the people working on the ties. Next we are going to make more soldier quilts. We are making them for a different organization this time and they are asking for larger (twin-sized) quilts.