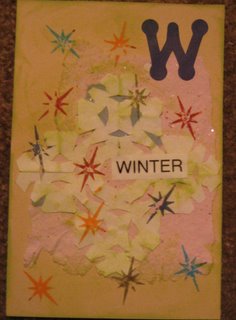 Sorry it has been so long since I posted. I have several things to show but think I will write individual posts instead of trying to do multiple things in the same one.

The above picture is from a Zapbooks swap that we have been doing for several months. Each month we traded alphabet pages with two other people. I still have several holes in my alphabet, partly due to others and partly due to me. This is the W page I made for the swap. For some reason I had a difficult time deciding what to do for W and finally decided on Winter. Made the classic cut paper snowflake, stamped lots of other snowflakes on the card. Turned out OK.
Posted by Melinda at 7:27 PM