I received this from my sister Robin a couple of weeks ago but forgot to post about it.  Isn’t it cute? 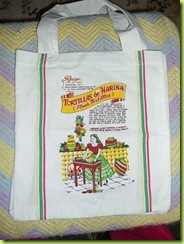 There is actually a recipe on the front of the bag. 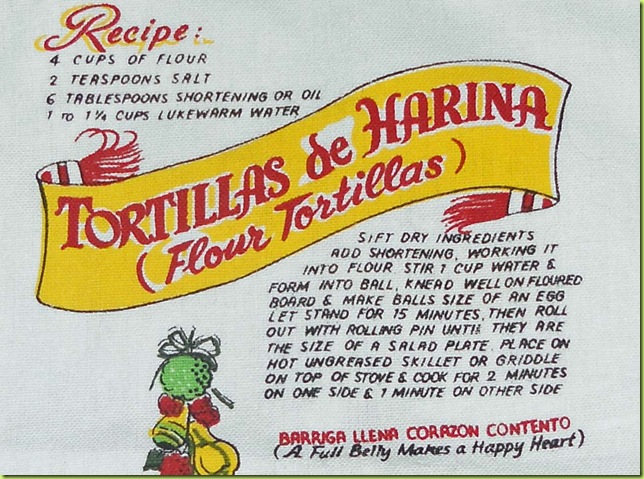 Robin says that she tried the recipe and while it is OK, it is not like Aunt Amy used to make.  She wants to try some buttermilk in it and I think Aunt Amy used sour cream.  It has been a very long time since we used to eat the tortilla hot off the stove from Aunt Amy’s kitchen.  I would love to make tortillas like she did.

Our Aunt Amy was really something.  She was a very strong woman and the head of the family.  She was the oldest and my father was the youngest.  She was about 20 years older than Daddy and pretty much raised him.  Our grandmother lived with her – she did not speak English and since we did not speak Spanish we didn’t communicate much with our grandmother unless someone translated for us – usually Aunt Amy or Daddy.

Aunt Amy was a professional knitter.  She made suits and dresses by hand for some of the Hollywood elite.  She lived in Calexico which is on the Mexican border and the train ran right though the front yard so that the house shook every time the train went by.  We had many good meals in that little house.  I still remember making tamales.

Robin and I decided to make tamales a few years ago – it was kind of like “Lucy and Ethel make tamales”.  They turned out great but it was in spite of us.  We did laugh a lot though.

Enough rambling – I need to finish binding a customer quilt so I can deliver it.